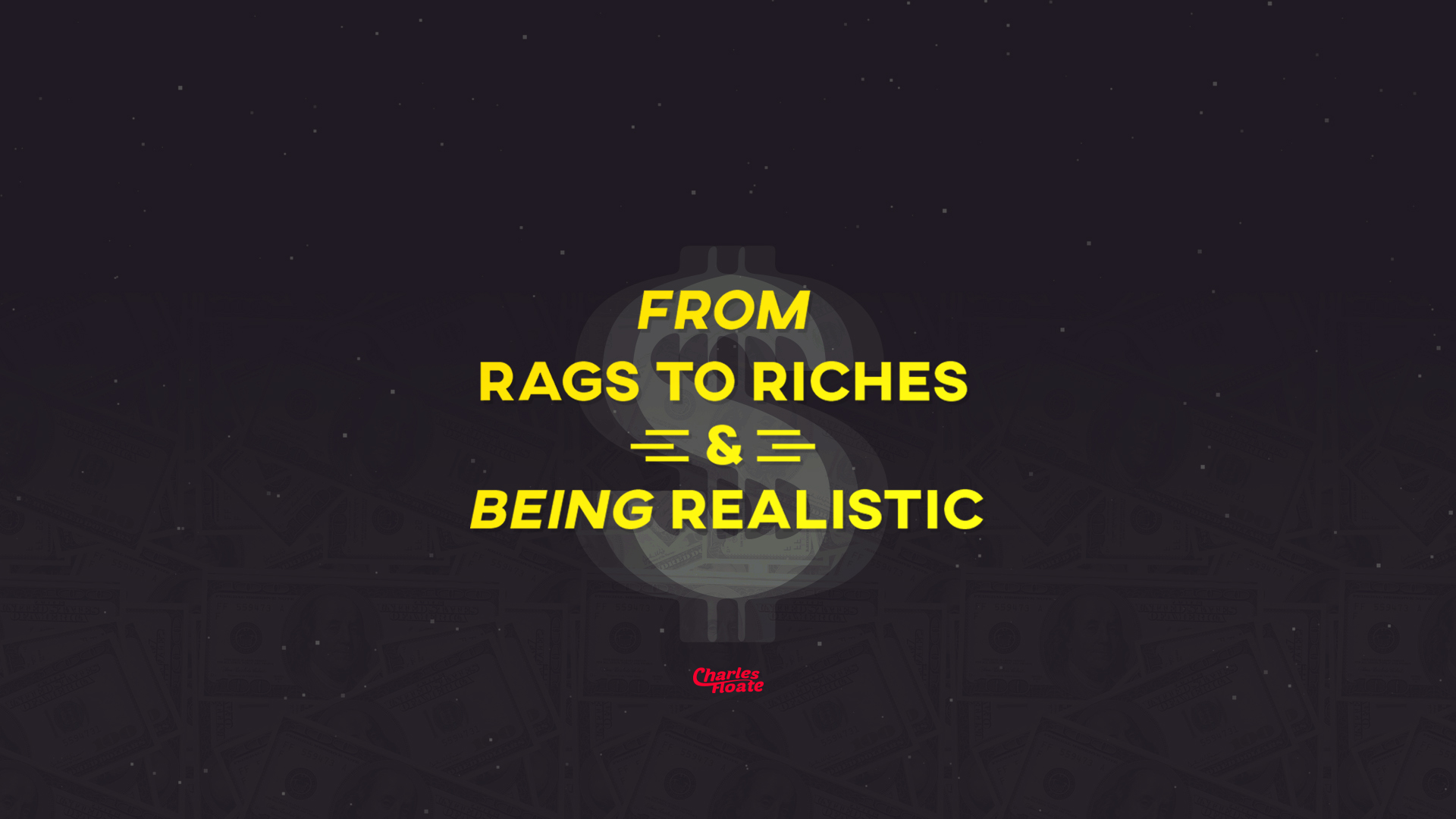 From Rags to Riches… and Being Realistic

The exploits/tricks/hacks people are selling you aren't real. If you want to make money, then you have to be realistic, and I'll show you what I mean by that in this blog post.

From Rags to Riches… and Being Realistic

Warning: This post is going to mostly consist of text, no pretty images or videos for you guys to look at.. But if you read it, you might just save yourself from never achieving your dreams.

There’s a lot of people who make money by selling dreams.. They get to live the life you want, by “showing” you how to get there, when realistically, they got there with the money you just gave them.

I know, that’s some inception shit right there.

This post isn’t about mentioning names, calling people out or causing hate among the community. If you’re clever enough, you’ll see people for who they are and realize that you won’t go from having 3 figures in your bank account to 6 in a matter of days… Unless you happen to have the winning lottery numbers for next week, just lying around.

Aside from the obvious reason of why I don’t use the word “hack” in my titles, or any other marketing-based variation is because it’s not true, or realistic.

Yes, there are some people who genuinely find a hole in a system and manage to exploit it, but if they went around making videos or blog posts about how they’re doing it… They wouldn’t be able to exploit it for much longer, would they?

The (very rare) people who do actually find these real exploits (and not the ones in YouTube videos being talked about) are either:

You’re probably thinking to yourself that you could be any 1 of these 3 things, but this blog post is about realism… So I’ll break these down for you.

Luck: So you’re just going to sit around waiting to catch a trick that could make you millions? No, no you are not.

Intelligence: If you’re highly intelligent, then go make some money.. It’s very easy to make money by showing your intelligence and the 3rd part to this will probably put you off doing these kinds of exploits.

Risk: A LOT of people who do these things, end up in prison or publicly shamed for being scammers or create enemies for themselves – All 3 are things you don’t want in your life, because when your “exploit” does stop working, then you have nothing to fall back on but the hate for yourself you’ve caused.

Of course there are some legitimate exploits out there, I’m not saying that you’re going to end up in jail and on the front page of the local newspaper over all of them, but the majority of the exploits that have actually caused people to become very rich aren’t legitimate at all and the “exploits” most dream-sellers show, aren’t exploits at all… They’re just worded like that for marketing purposes, and are probably just basic tactics used by advanced people in the industry changed up a little to look better.

Unfortunately, 99% of you reading this have more than likely bought into something that offers nothing in return for YOU.

They’re re-shaped, re-worded, re-priced versions of what has come before OR don’t actually do anything altogether.

There’s a reason why in 4 years of blogging I’ve released 1 proper product and it’s still with us nearly 2 years later. Whilst in that space of time, most of these “gurus” (who mostly have a basic understanding of techniques, but a good sales voice) have released several, each year – If you’re getting a new marketing email every week from someone in the internet marketing industry, offering you a new “revolutionary” product.. Then Unsubscribe NOW, even once a month is a big turn off… Realistically, a good, new product that’s going to be supported for more than a year will come out once a year, if that, and certainly that tool isn’t going to be revolutionary – It’s just going to make your job/life a lot easier in one, or maybe a few aspects.

You can check out my full list of real tools here – These are tools that have been around for years, actually offer support past the initial 6 months of opening and will help you.. Plus, I didn’t even include any affiliate links in that list, so it’s pure advice as there’s no money in it for me.

How To Actually Get Rich

There isn’t a solid plan of do this and you’ll make money.. If there was, there’d be a lot more rich IM’ers out there.

However, there are certain aspects that you can run with to become successful, and start earning real money.

There’s a wealth of opportunity out there to make that initial income, you just need time. If you already have a paying job, then use that money, but if you don’t, then here’s a few IDEAS (I suggest using your own ways, and these ideas should be taken with a pinch of salt) –

There’s just a couple of ways to go about making money on the internet. There’s a ton more out there as well, all require your time and aren’t going to cost you money to learn how to do.

There’s 2 paths you can go down once you have capital to invest. I’ll cover both of these for you:

If your capital idea is doing well, then why not expand it using the capital you’ve earned?

In the first example idea I gave, you could use your capital to hire a fulltime writer for $10/500 words, and still charge $20 – Making a 100% return, and you already have the client base to buy the articles off you.

You can also use the capital you’ve made to create a website where people can order your content, create systems to manage your writers, hire people to handle the support/sales, invest in paid traffic or SEO to get more clients and so on… And that’s just that one example idea I gave you.

If you don’t want to expand your free operation.. Then you need to specialize. You need to pick a certain area of IM that you want to focus on and really learn and grow your income from the money you’ve invested.

You could do a Ryan Stewart and guest post on every SEO blog going, to get clients and grow an agency.

You could join Stack That Money and master the arts of paid traffic affiliate.

You could do a Gary Vaynerchuck and go after your potential customers by answering their questions on social media.

You could join BlackHat.Community and start dominating SERPs with black hat SEO.

There are a plethora of things to specialize in, inside of internet marketing… It all just depends on what interests you and what you want to invest your life into.

P.S. Use Your Money Wisely

Once you have money to invest, you’ll need to constantly be thinking about ROI, aka “Return on Investment”.

For every penny you spend, you want to be making a dollar back – That’s not accurate, just the mentality you should have.

Don’t spend $500 on courses if you only have $1,000 capital. Spend that $500 on domain names, paid traffic, social tools.. Or whatever it is that you want to do in your internet marketing specialty or business expansion.

Thanks For Sticking With Me

That was one huge wall of text, aye?

I hope this gives you a bit more inspiration and a better understanding of making money with internet marketing, though it will take a lot of your time.. Nothing happens over night, you’re building a business here.

Don’t forget to join my email newsletter and drop a comment with your thoughts on making money with IM or if you have one, drop your your success story below.