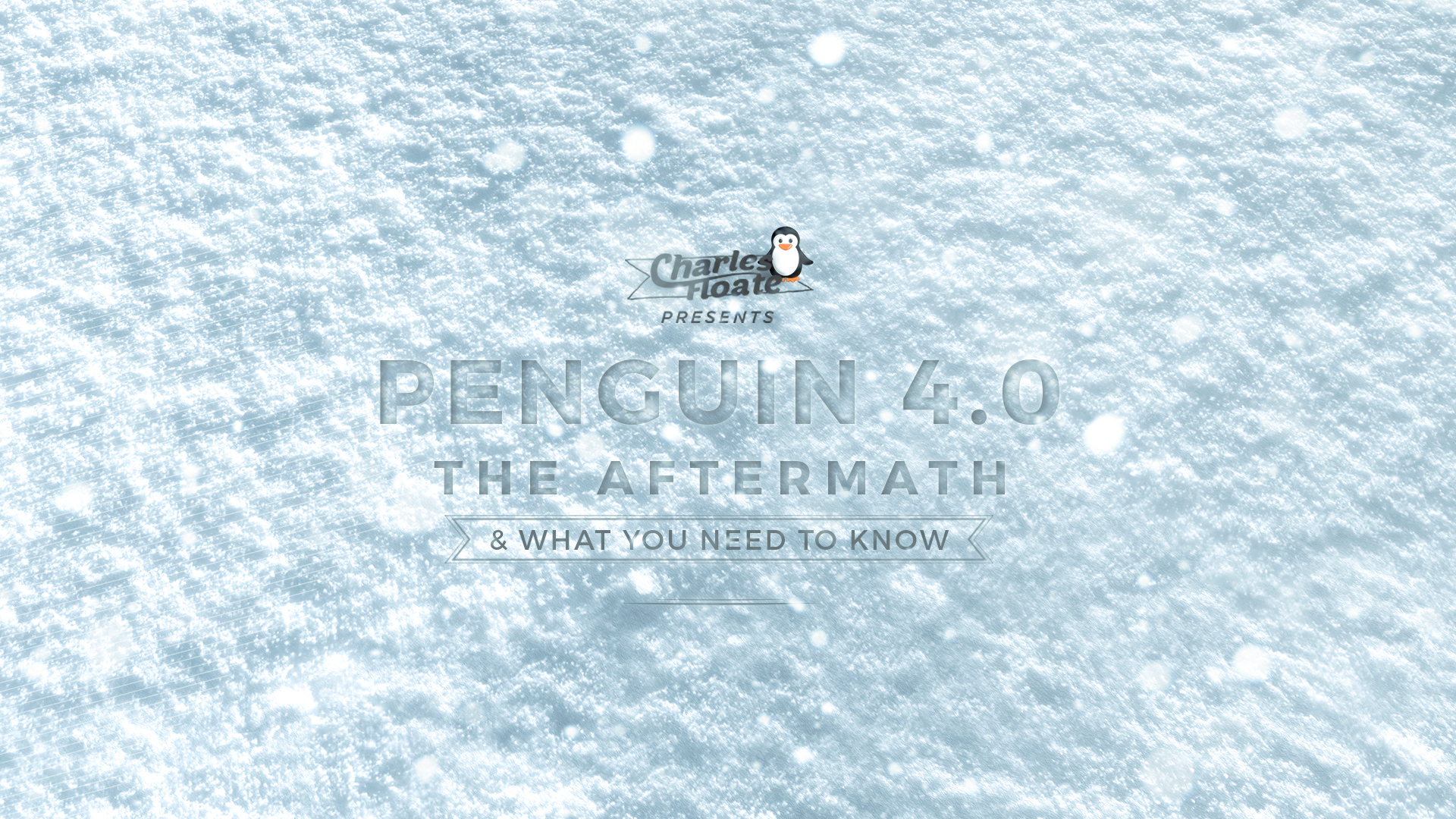 Penguin 4.0 – The Aftermath & What You Need To Know

One of the most anticipated Google algorithm updates of all time has finally arrived, and in this post, I'll be running through the entire update, what we know so far, my research and advice on it.

Penguin 4.0 – The Aftermath & What You Need To Know

It’s been a few weeks now since the rolling Penguin update was announced, and though I got out a video that generated hundreds of new email subscribers on the day:

There wasn’t much actionable information at that point.. We only had what Google said, and if you’ve been following me for any amount of time, then you’ll know they tend to not be totally honest about everything they’re doing/have done.

At the end of the day, we, as SEOs, are the enemy.. Who would spend a ton of money on Adwords, when they can get the traffic organically at 1/10th the price? It’s in Google’s interest to make SEO as difficult, complicated and overwhelming as possible.

An Introduction To Penguin 4.0

On September 23rd (2016) Google announced that the continually rolling Penguin update was hitting the SERPs:

Penguin is now realtime and part of the core algorithm. It took a while to launch it, but totally worth the wait imo https://t.co/ItQM8XxuQ5

(I suggest you follow Gary, and probably @JohnMu as they’re the main 2 guys at Google releasing “webmaster” aka SEO updates & answering questions – “Keep your friends close, but your enemies closer”)

The update essentially took the previous Penguin updates (that would happen on a set date, and shake up the SERPs in a matter of hours/days) and mashed them into an updated, continually rolling Penguin that assigns value to links (kind of like the old PageRank) and updates your reflective rankings (depending on your said assigned value) in real time, rather than having to wait for the next update to hit the shelves.

Previously, Google would roll out updates to the English SERPs first, and say they affect x% of SERPs. However, in this instance they have specifically stated that the update is going to be rolled out across every country and language that Google is in.

This could lead to a few problems for spammers in foreign languages, as I know several SERPs in a few of the Nordic versions of Google have been dominated by spammers for years.

Disavow SHOULD Be Quicker

Though they haven’t made any direct updates to the disavow tool, according to some of the Google insiders, it should have much quicker affect now.

This is after people have in the past done tests (such as Cyrus Shepard) and not seen any movement or even the signs of a response in weeks, some cases months.

I made a video several days before explaining the unannounced updates that had been causing fluctuations in the SERPs:

At the time, I was completely speculating that it was Penguin 4.0, but it turned out I was right on the money.

The sites/pages that I had correlated being hit, and those that saw an increase got my SEO senses tingling, with higher levels of exact match anchor texts & poorer quality of links.

This first update was, however, all over the shop.. It had pages bouncing all over the place, and seemed as if they’d rolled it back at one point.

Obviously once the announcement was made of Penguin 4.0, the SEO world went mad with speculation, news and the obvious “SEO is Dead” posts sprouting up everywhere.

However, unlike previous updates, and even the initial testing updates.. This one had no real signs of life when they actually announced it. It wasn’t until a good few days (and on some sites/niches/SERPs even weeks) into the update that I started to see any movement what so ever.

Algoroo showed this as well:

The big red spike is the Sep 3rd flux beginning. As you can see, once they announced the update it’s been spiking with unsettled positioning ever since.

Now that it’s been a few weeks since the announcement, and we’ve seen some real impact on the SERPs.. I’ve been able to properly analyze sites that got hit, sites that saw big jumps and discussed with a lot of other SEOs what their thoughts were on the update.

It wasn’t until the last few days of September where I started seeing real changes.

The only properties of mine that got hit were parasites, this is to be expected with all Penguin updates.. The above parasite property was a well built parasite, though it had an extremely high anchor text ratio with just 20% of anchors being branded/generic and 80% being a mixture of exact and partial.

Notably, the parasites/pages that got hit the most seemed to have the highest levels of link decay (the number of links lost over time) as some of my higher exact ratio properties (but with contextual spam that had lower link loss rates) didn’t get hit as badly.

I’ve spent a good number of hours investigating sites and pages now, and there are a few main points I found from my research of well over 300 hit pages.

It was pretty obvious to me that pages with higher levels of exact & partial matches were getting hit. It seemed ratios of >30% were the ones hit the most.

I saw pages with 10% – 25% exact/partial ratios ranking highly for the majority of keywords I looked into – Something I think a lot of people get confused on, is what does anchor text ratio actually mean. If you have, say 3 main keywords, with 10 partials then ALL of those keywords should fit into the exact/partial % (e.g. 3x 2%, 10x 1% etc) it does not mean that each keyword should take up 10% of your anchor profile. Derp.

A Different Kind of Linking

I built more generic/branded anchor texts, but put my keywords (or partial matches) around the keyword.

So, instead of having “Looking for the best car insurance in the UK?” I’d change it to “Looking to find the cheapest car insurance? Visit carinsurance.com” – With the underlining being the anchor text in both cases.

The site I’d trialed this on had <2% exact/partial match anchors, but had a ton of these more generic/branded keywords used. It’s since gone from around 850 uniques visits/week to over 3,000.. Which is a considerable leap.

Balancing out your anchor text profile is probably the best way to win right now. Things like comments, directories/citations and infographic submissions are great ways of balancing out your link profile quickly, and safely.

Note: Check out my Link Building in 2016 post for more link building ideas.

From my research, sites with lower anchor ratios generally had more diluted links like this – I did note that generally pages that had press release distributions (mass press releases of low quality) and tons of Web 2.0 links (there were several sites that seemed to have Blogspot spam links) were performing a lot worst.

Out of all my sites, the ones that had high numbers of unique referring domains from guest post/article/PBN style sites were doing very well.

This isn’t all too surprising, Google has always favored contextual links, as it tends to be not very often that people would link to an outside site in their sidebar or footer, for example – This showed in quite a big way with some of my SAPE sites, which took a hit over the past few days, and 1 took a significant hit in the pre-announcement flux.

Sites that had elaborate tiering going on, or were spamming at the tier 2 level specificially took a big hit- This is mainly down to how Penguin now assigns a spam signal to your backlinks, and as such, your backlinks backlinks will likely have poor spam signals which will feed up the chain and have a negative impact.

One of my sites in which I had built cheaper PBN links to my white hat tier 1 links (either natural links or guest posts) saw a significant boost though. This kind of correlation from my above statement would re-assure me on my point.

Not too many other SEOs have been covering the update in much detail, but there are a few that stand out.

As I said, there’s not many people that have covered this algo update properly, hopefully my post did the job, though I highly suggest following Marie for more info as she’s all over algo updates.

Penguin is the bane to many an SEO, and I’m glad to say it’s not had much affect on me. I hope this post has given you the info to stop it in it’s tracks as well, and possibly even benefit as a direct result.

If you’d like to get more updates on the latest algo updates, and a free 7 day SEO course, then join my email newsletter below.